Baskets are containers woven from plant fibers and materials such as twigs and grass Although basketry is a craft that was and continues to be practiced throughout the world, As early as 8,000 B.C., Shoshone people of the North American Great Basin were making baskets of twine that they were able to cook in. Native Americans basket makers used a number of styles as they wove containers. One technique was wickerwork, an over-and-under interweaving of horizontal fibers on a vertical frame made from sturdier material. This frame was known as the warp. Variations of wickerwork basket making such as plain-twining, three-strand braiding, and lattice-twining produced sturdy and tightly woven baskets that were beautifully designed and utilitarian. The second technique, coiling, was accomplished by twining together weft fibers and coiling them several times around a simple foundation. Plaiting, a technique similar to braiding, was also used for baskets. Many Native Americans basket makers used a variety of styles, choosing the one based on the individual basket's use. Usually women made the baskets. crafting them from the fibers at hand. In the Northwest, basket makers used Cedar; in the Northeast they used Cattails to weave mats that served as insulation for their homes. In the North American Southwest, fibrous plants such as Agave provided basket material. Basket makers in what is now southern California used grass and rushes to weave their containers. They made patterns by choosing different weaving techniques or by coloring, or dying, the fiber. Sometimes basket makers used reeds that were treated with ashes and left to dry in the sun to give them a white color. They also dyed reeds with plant pigments or buried them to absorb mineral pigment from the soil. The Pomo, a tribe living in what is now Southern California, were known for their basket-weaving craftsmanship. They wove feathers, down, and shells into their designs. When English explorer Sir Francis Drake saw the feather baskets, he noted that they were so well made they held water. To challenge their skills, Pomo weavers wove baskets the size of the head of a pin. Unlike the practice of other North American tribes, both Pomo women and men made baskets. They were considered the finest basket makers in all the Americas. Native Americans took care when they made baskets because these items were such a necessity to daily life. Some baskets were made for gathering food. Others were intended for the preparation, serving, and storage of food. Loosely woven baskets were used as sifters or strainers. Southern California tribes, including the Pomo, used coiled baskets that were coated with asphalt both on the inside and outside to carry and store water. These containers typically had long necks and stoppers. Open coiled baskets were often used for cooking. The food to be cooked was placed inside the basket and covered with water that was then heated by dropping hot rocks into it. Larger baskets were used to store food such as acorns. In areas where wood was scarce, cradleboards were woven of wickerwork; sometimes even houses were constructed in this manner. 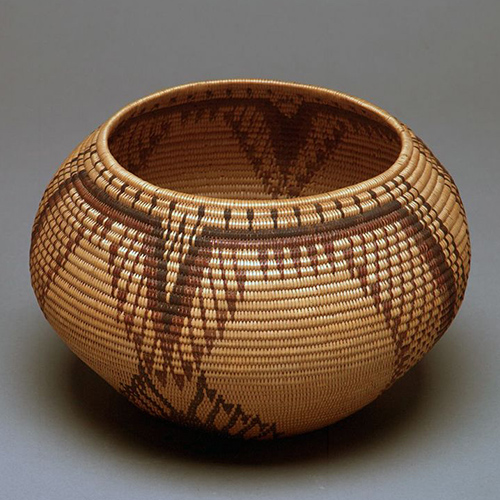