These contained living quarters for families as well as areas shared in common with other families. Although multiple family dwellings were built by other cultures, Native Americans constructed some of the largest and most impressive in the world. The Anasazi, ancestors of modern Pueblo peoples, built apartment complexes in what is now New Mexico, Arizona, Utah, and Colorado. Anasazi adobe cliff dwellings consisted of hundreds of rooms and several stories. The remains of many of these vast complexes, which were built around 700 A.D., still stand throughout the American Southwest today. The two most impressive examples of Anasazi architecture are Mesa Verde in the southwest part of what is now Colorado and Pueblo Bonita at Chaco Canyon in what is now New Mexico. Mesa Verde's Cliff Palace contains 200 rooms. In the early 10th century, Pueblo Bonita consisted of about 100 rooms. A century later it covered almost two acres and contained 800 rooms. At its highest point, the D-shaped pueblo was four stories high. In the Northeast of what is now the United States, the Iroquois lived in bark covered longhouses. Although many families belonging to the same matrilineal clan lived in each dwelling, every family had its own separate sleeping area complete with bunk beds. These 20-foot long apartments were considered private, with two families living across from each other sharing the same cooking fire. When young people married, sometimes an addition was built onto the end of the long house to accommodate their new family unit. Longhouses ranged between 90 and 100 feet in length. Enclosed porches at the ends held firewood and served as storage for possessions. The houses, which would later serve as an inspiration for Quonset Huts, were enclosed by a high lo stockade, making them the first secured apartment complexes on the continent. 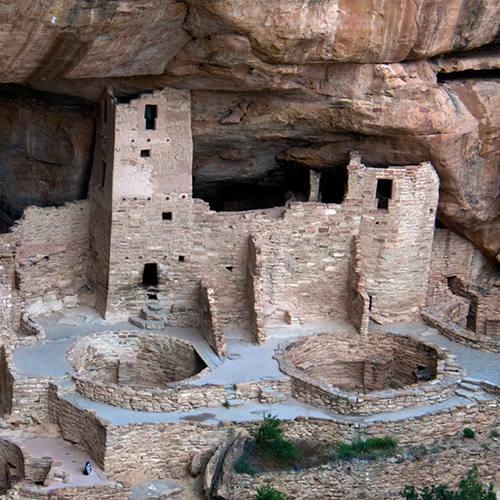