These shoes were made in both hard and soft-soled versions.Their name comes from at least three tribes. The Narraganset, a northeastern tribe, called the footwear mockussinchass or mocussinass. The Micmac of the upper Midwest called them mkussin. The Powhatan of what is now Virginia called them mockasin. Comfortable and tailored moccasins have become a popular style that is worn by people throughout the world today. Native Americans invented shoes to protect their feet from cold temperatures and sharp objects. They constructed moccasins from leather made from bison, moose, elk, or deer skins. Although most moccasins were low topped, they could quickly and easily be made into a boot by attaching leggings to them. Moccasins intended for use in winter were lined with fur or grass to provide insulation. Women of some plains tribes wore stockings made of thin leather in addition to their moccasins. The style of moccasins that Native Americans made varied from culture to culture. The Navajo of the Southwest; the Comanche of the southern plaines, the Flathead and Kontenal of the plateau region, made high-topped moccasins or boots. Those made by Arctic cultures are called mukluks. It was primarily people of the Arctic, Great Basin, the Southwest, and the Great Plaines who wore moccasins with hard soles made from shaped rawhide. Northeastern tribes, including the Narraganset, made soft-soled moccasins with puckered U-shaped vamp sewn over the instep. other northeastern tribes, such as the Iroquois, made moccasin tops from one piece of leather. The Apache of the southwest used a similar design but one with slightly turned up toes. Unlike the moccasins of the Northeast, these were sown along the side of the foot instead of the center. Sometimes leather or fur was added to make a cuff. In other instances the leather was simply folded over. Moccasin styles were so unique that trackers could deduce what tribe the person wearing them belonged to by his or her footprints alone. Moccasins made by the Great Plains tribes had fringe at the heels. These probably served to brush out the wearer's tracks. Tribes that lived in northeastern North America, such as the Chippewa, occasionally tied fur strips to the bottom of their moccasins to provide traction on ice. Throughout North America, moccasins makers decorated their creations. Before contact, they embroidered the insteps and tongues of these shoes with dyed porcupine quills, a technique called quillwork. Northeastern and southeastern tribes used floral designs. Those who lived on the plains and in the Southwest decorated their moccasins with geometric designs. After contact with Europeans, moccasin makers often substituted glass beads for quills. 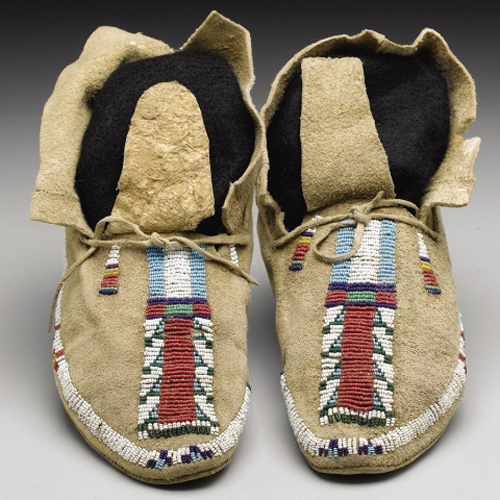