Tipi is the Dakota, Lakota, Nakota word for 'home' and has a broader meaning for these Native Americans than the structure it is used to identify in the English language today. Many scholars believe the cone-shape tipi of the plains evolved from Subarctic tents that existed at least 5,000 years ago and shorter conical tents made by Woodland tribes. Most of the tribes that use tipis are known to have migrated from the Eastern Woodlands to the plains and prairie in historic times. The original plains tipi coverings were made from bison hide. Several distinguishing features differentiate a simple conical structure from a tipi. The floor plan of a true tipi as developed by the natives of the northern plains is not circular but oval in shape. The structure is tilted, with the rear side steeper than the front, where the door is located, rather than being symmetrical as a cone would be. Different tribes developed various styles of tipis, depending on the arrangement of the poles. Tribes that used three poles for foundation poles, the poles on which the others are laid, include Dakota, Lakota, Nakota, Cheyenne, Arapaho, Assiniboine, Kiowa, Atsina, Plains Cree, Mandan, Aiikira, Pawnee, and Omaha. The Crow used a four-pole foundation arrangement, laying in more poles to complete the frame. Evidence from tipi rings (stones placed on the hide to anchor it on the ground) indicate that originally tipis were quite small, compared to the ones that are made and sold today. Tipis were very energy efficient and comfortable places to live. Since a tipi could be erected or taken down in a matter of hours, it was an extremely portable dwelling. With no flat sides, tipis were aerodynamic, allowing strong prairie winds to pass around them without being blown down. In the wintertime a fire kept the dwelling warm. The smoke hole served as a ventilating system and could be opened and closed by adjusting poles that were tied to flaps, pulling air from the door and beneath the tipi cover to the outside while keeping out the elements. When the weather became bitter, snow was banked around the tipi. (In post contact times Native Americans tied canvas liners to the poles inside of the tipi to provide more insulation. Non-natives recognized the utility of the tipi. Kit Carson, who earned a reputation as an Indian fighter, insisted that explorer John Charles Fremont pack a tipi when Carson accompanied him on his first expedition that began in 1841. The U.S. Army was so impressed with the practicality of the tipi design that it was incorporated into the design of the army tent, which was used by soldiers during the Indian Wars in the mid-1800's. Today tipis are gaining popularity throughout the world. 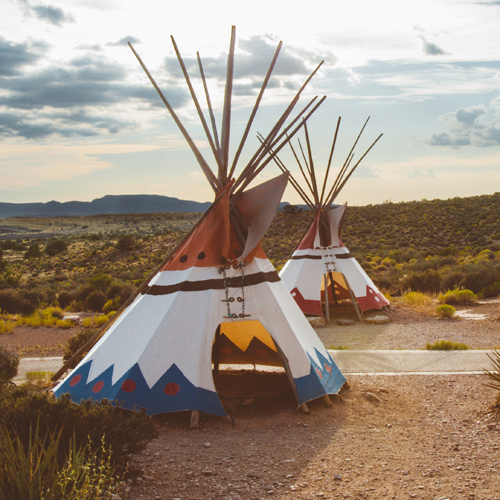